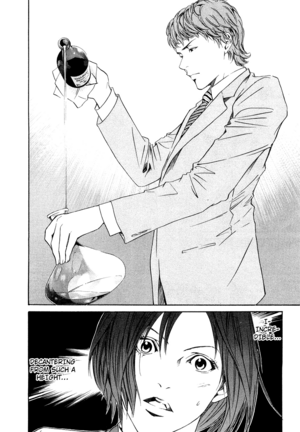 The concept of "decantering" and the manga that made it a meme comes from a manga called Kami no Shizuku, a manga to be based around the full-throttle, pulse-pounding world of wine-preparation.

The manga's basic plot is described as follows:

The main character of the manga, a young man called Shizuku Kanzaki, discovers the beauty of wine after his father, a famous wine critic, dies and leaves an unusual will: a description of 12 wines he considers to be the best in the world, comparing them to Jesus Christ's disciples. The first person to find these "disciples" will inherit the father's wine collection, a contest that pits Shizuku against his adoptive brother, Issey Tomine, who works as a sommelier.

If that didn’t get your heart-rate up, I don’t know what will. 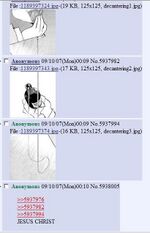 The actual meme derived from Kami no Shizuku is that of Decantering. Decantering is a process used in wine-making where the red wine that's being made is carefully poured from one container to another, leaving the solid particles in the first container. However, in Kami no Shizuku, this mundane process becomes a point of importance, as a female onlooker watching Shizuku Kanzaki decanter is amazed and utterly awe-struck by the apparently amazing height at which Shizuku pours the mixture. Incidentally, the proper term for this action would be "Decanting".

This meme is rather similar to that of Multi-Track Drifting in that it's derived from a manga-artist trying to make something boring or stupid seem extreme or incredible.

Many edits and shops have arisen from this, usually pertaining to Anonymous showing-off the amazing decantering-tricks he can do.