Clannad is a harem visual novel developed by KEY, the game corporation famous for classics like Kanon and the lesser known Air. Unlike Kanon, the popularity of Clannad was fostered early by a concentrated promotion campaign by moonspeakers from AnimeSuki, who sold the show as "the best romance novel in history" to waves of newfags over a year's time. This building of premature fans was also accompanied by premature trolls, with many people declaring the show and "greatest masterpiece of all time" and "worst shit ever" before the first movie even aired. Originally considered to be the prime trollbait of late 2007/early 2008, Clannad has proven to be not offensive enough to attract massive rage and hatred like its predecessor, Lucky Star. However, opinions on the series are rarely congruent, making it the most frequently trolled Key/Kyoto Animation collaborative productions in recent memory.

Dangos are Japanese pastry snacks where a bunch of colored balls are skewered on a stick and drizzled in sauce. They are one of Nagisa's many favourite foods as well as being the main theme of her "thing", the Big Family of Dangos. With that in mind, when the first episode finally came to a close, Anonymous and anime fans everywhere were instantly hooked by the ED, which was surprisingly, because of the anime's harem setting, comprised entirely around the theme of dangos (the song was appropriately named "Dango Daikazoku", or "Big Family of Dangos"). As it was not enough to deter the trolling of all KyoAni works, the dango has made a name for itself as being one of the best KyoAni-contrived ideas that make their anime WIN as well as its recent entry in the first round of SaiGar 2008 (though it became apparent that joke entries were not tolerated this year around). 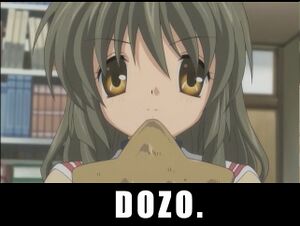 Well? Will you accept her gift? 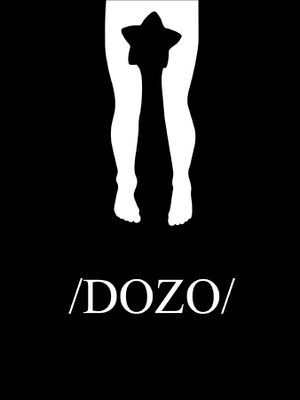 Will the Germans accept your donation?

“Dozo” is a word/term associated with the character Fuko Ibuki from Clannad. Dozo, commonly as romanized “douzo”, translates to “here” as in when giving someone a gift or presenting them with something, though it is sometimes translated as “Please have this” or “Help yourself”.

Fuko is a strange and eccentric girl. From when she’s first introduced she is hand-carving starfish out of blocks of wood, which she intends to give the students as an invitation present for her older sister’s wedding. Each time she offers up a starfish in the anime, she says “dozo” or includes it in the sentence.

Fuko quickly became one of /a/’s most beloved characters, due to her cute and childish nature and her kind and generous spirit. These feelings became even stronger after Fuko’s origin and true nature were revealed in Clannad. When Fuko is brought up on /a/, some Anonymous fail to recognize her, some saying they’ve never seen her before, or claim to be unable to see Fuko in the pictures at all. Even Fuko’s iconic hand-carved starfish seem to be unable to revive Anon’s memory, many of them confusing the starfish with stars or flying Shuriken.

Used to refer to a quote of Youhei Sunohara, the rather dense and chauvinistic friend of the main lead, Tomoya. Sunohara fancies Tomoyo Sakagami, a sweet yet defensively violent girl who frequently beats him up, and wishes to turn her into the perfect little housewife. During one scene, he begins talking about Tomoyo's prowess, leading him to (incorrectly) reach a conclusion of, "The strongest woman sewing my clothes...those would be the strongest clothes". Like Gaston, Sunohara's misplaced misogynistic views, coupled with his lovable stupidity (like Emiya Shirou) endeared him to many Anonymous, and this hilariously oblique quote only cemented his idol status among many Clannad fans on /a/.