The Melancholy of Haruhi Suzumiya

The Melancholy of Haruhi Suzumiya or just Haruhi for short is a massively popular 2006 anime based on a series of light novels[1]. It's so popular, in fact, that it flooded /a/ to the point of saturation, causing a massive backlash and making it the prime trollbait, even eclipsing Evangelion at points. At least until Lucky Star came around. Most dislike of Haruhi came not from the anime or novels themselves, but rather the incredible popularity the anime acquired, even among newfags and Gaiafags. The trolling has been somewhat revived with the announcement (and viral marketing of) the second season of Haruhi, "The Disappearance of Haruhi Suzumiya," based on the novel of the same name. 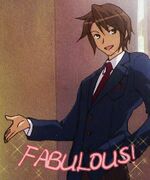 Capital meme that started with a picture of a gleeful Itsuki Koizumi striking a presentation pose, with the words "FABULOUS" tracing the movement path of his hand. While professing to have a crush on Haruhi in the light novel series, Itsuki in the anime is commonly acknowledged by /a/ssholes and /b/tards to be a fag, and the picture which popularized "FABULOUS" was widely seen as an accurate and effective summary of the character's role in the show. Like QUALITY, FABULOUS is an ironic meme, only it refers to characters who are intensely and aggressively gay but have an air of style and finesse. Despite the Itsuki connection, it has been used positively at times, in particular with Leeron from Tengen Toppa Gurren-Lagann (who is often labeled "FABULOUS/FABULOUSLY GAR" for being both gay and amazingly competent) and Lelouch/Zero from Code Geass (who was a fun magnificent bastard).

Is this a food anime? Originated from a grotesque dish of hamburgers shaped in the face of Haruhi. It has since transformed Haruhi into a Wendy's franchise, embedding her face on various logo templates as well as replacing her head with a hamburger in various pictures.

Is this a dancing anime?

Term from a The Melancholy of Haruhi Suzumiya thread in /gif/. One user, unaware of what Haruhi was, asked "Is this a dancing anime?". 4chan found this humorous and the meme spread its legs in /a/ and /b/. Ultimately ended up being used in an article in Newtype magazine. Often used as the anime equivalent of Battletoads or Blackbob Niggerpants, especially /f/ as the response to someone requesting the source anime of a flash.

I wanna taste a dick 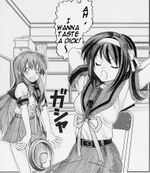 She wants to taste a dick.

A comic featuring a smug Haruhi saying, "Ah~ I wanna taste a dick," surfaced at one point. Since then, wanting to taste a dick has become an important part of Haruhi's character.

Although the concept has been around since the beginning of Haruhi's initial airing, it wasn't until the beginning of 2008 when one popular drawing/model of the evocation of Rule 64 of Kyon came into light and started to burst in popularity. Straying away from its /y/ roots, Kyonko has been identified as one of the hottest gender-bendered character in anime. Perhaps in a weak attempt to make her cuter, Kyonko oddly does not resemble the original in personality compared to the other genderbent versions of Haruhi characters, and is usually depicted as a flatchested tsundere.

Popular catchphrase from the second season, uttered by Kyon's Imouto, meaning "Kyon, phoooone~". Anons having nothing better to do during the airing of the same but different Endless Eight episodes over and over have found cuteness in the different variations of the various lines, especially this noticeable one that is the actual cause of each loop per episode. Other lines include "We've entered an endless recursion of time", said by the ever fabulous Itsuki Koizumi in explaining their deja vu feeling.

/a/ nickname for Tsuruya, the constantly laughing fanged green-haired girl from the anime The Melancholy Of Haruhi Suzumiya and one of /a/'s current obsessions. Largely supplanted by "Nyoro~n" because of the massive popularity of the Churuya fan comics, though the name has stuck to girls in other anime with a similar appearence and disposition (like Kiyal from Tengen Toppa Gurren-Lagann). Name was later adopted by a formerly Anonymous speedsubber on /a/ and /m/.

Negative term for female characters that, aside from having well-endowed bodies, are otherwise utterly pathetic, useless and annoying. Although this term has been informally used in the distant past, it didn't become a meme until trolls on /a/ used it to chide Asahina Mikuru, who is virtually the archetypal moeblob. From there, the term migrated into the rest of the Haruhi fandom, brought there by people who frequent both /a/ and other anime communities, and has since become a common description (no longer an insult in this context) for very "moe" characters. According to Ken Akamatsu, what most know as a "moeblob" is the correct interpretation of what all moe girls in anime should be like.

Presumably, the opposite of this term would be a "Garmass".

Using an anime image coupled with a program, one user created a series of images that consisted of an anime character leaning over the left side of the frame, with text (copied or relevant) in the middle ending with "nyoro~n". With the posting of a link to the program download site, hundreds of copies were made and plastered /b/ on September 1st. Claims were made that this person had actually made 80% of the flooding force. On December 26th, a spam bot flooded /b/ with numerous nyoro~n pictures with text copied from other posts, to the point that most posts in /b/ were nyoro~n pictures.

The character is, in fact, a tiny variant of The Melancholy of Suzumiya Haruhi's Tsuruya-san named Churuya-san, serialized as a webcomic by Utsura Uraraka. "Nyoro~n" is her trademark saying. Numerous 4koma drawn in the same style have been created, most prominently using Gundam mecha and Nekki Basara of Macross in /m/ usually with the "nyoro~n" catchphrase in the final frame. Pictures of these characters with speech balloons colored to match the boards' background (thus making the text field appear to be part of the balloon) have also appeared, allowing users to make posts using the identities of the characters in question[2]. 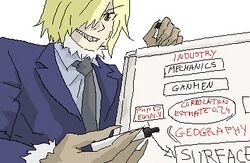 So easy a Beastman can do it.

A forced meme spawned on /a/ in response to an unconventional "grassroots" advertising campaign for the English version of The Melancholy of Haruhi Suzumiya. Prior to the English website's launch on 22 December 2006, much curiosity and speculation surrounded the poorly designed site as to whether or not it was legitimate; this interest was further inflamed after a clever Anonymous forced the cheap Java counter to relay who was running the server ("KadoUSA"). Following this revelation, hidden HTML tags started appearing in the source code of the website, role playing in-character as Haruhi, Kyon, and Yuki from The Melancholy of Haruhi Suzumiya anime.

From 10:00 P.M. 21 December 2006 to 2:00 A.M. 22 December 2006, these tags were progressively updated, as if Nagato Yuki herself was behind the website launch. In response, much talk was generated on /a/, to which one Anonymous quipped about the hullabaloo as being an example of "viral marketing". The Anonymous who first brought the term to /a/ learned about it while lurking in various Anime News Network topics dedicated to the Haruhi website's updates. When the website finally did launch, featuring a picture of Haruhi in a Santa Clause outfit with the tagline "MERRY CHRISTMAS" in large red letters (much to both the amusement and chagrin of /a/), a topic by tripfag JamesCid was stickied and the "viral marketing" meme was exposed to many Anonymous for the next day.

Almost universally considered to be /a/'s most annoying meme, even more than "Set fail for One Piece" and "Why is she such a slut" by virtue of its massive popularity. Viral marketing enjoyed its highest rate of usage toward the end of December 2006 and the first months of 2007, whereby after that Anonymous diverted his attention to SaiGar and Haruhi topics in general became more rare. While still a popular meme, it has, along with the Haruhi anime, receded into the history books of /a/.

Incidentally, however, the meme was recently resurrected by Anonymous thanks to the new Gainax anime Tengen Toppa Gurren-Lagann. One day, an Anonymous posted a picture of a vaccuum-sealed Enki model on /a/, and another Anonymous responded, "is this viral marketing?", the joke being Enki's pilot is a character named Viral. As Viral himself became more popular on /a/, his name association with viral marketing became an excuse to hijack Haruhi topics with pictures of Viral. This further evolved to shopping Viral's face onto stock pictures of businessmen, busily worked up over sales figures and expenditure graphs. Much of this "re-imaging" of the meme has been viewed positively on /a/, partly because of Viral's fan following and because Gurren-Lagann has been a goldmine of humor (and well done) original content, a rarity on /a/ for any series.

Note that "viral marketing" is the creation of marketing messages that are spread by the public due to entertainment, humor, outrage or other quality of the message. This is not the same as "astroturfing" which is paid shilling or other activities that simulate a false grass roots interest. Astroturfing is unlikely to be a big problem in 4chan or other futaba-based boards, due to the high thread turnover, the inability for marketing shills to establish false personalities with which to accrue user trust, and high levels of resistance to any form of positive messaging.

Why is she such a slut? 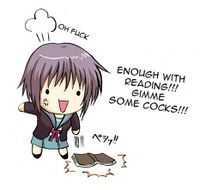 Why is she such a slut?

One of the most irritating forced memes ever concieved. Started in a "Why is Sakura such a slut?" thread when one Sakura Matou defendant attempted to redirect the 'slut' accusation towards Yuki. Since then, and for most if not all of March 2007, a select few Anonymous have made it their responsibility to create a new "Why is Yuki such a slut?" thread at least once every day, despite the fact that few if any of /a/'s residents find this witty or clever, nor does it make any sense in the context of the anime. Seems to have moved back to Fate/stay night, this time to Saber, lately, after the translation of the Fate route of the game. There's still nobody laughing.