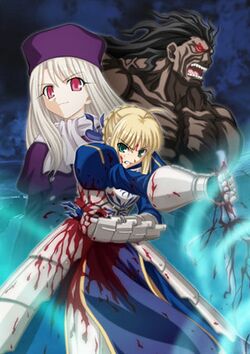 Another wildly popular visual novel / H-game by Kinoko Nasu and TYPE-MOON Productions (the other being Tsukihime). Follows the story of Shirou Emiya through the Fifth Holy Grail War, which faces off Masters and their Servants (reincarnated spirits of legendary heroes) in competition to obtain the Holy Grail. There are three distinct story arcs playable in FSN: Fate, Unlimited Blade Works, and Heaven's Feel.

Like all aspects of the Nasuverse, Fate/Stay Night has a huge following throughout 4chan, (recently bolstered by the Mirror-Moon translated release of the Unlimited Blade Works arc). 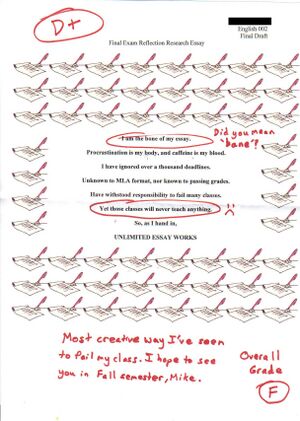 Also known as "Unlimited Essay Works". Parody of Unlimited * Works that a resident of /a/ ("Mike") turned in as a final essay for his English class, which he alleged to be failing anyway. The paper was immediately graded, and Mike (miraculously) managed to obtain a D+, though he still recieved an F in the courses. The utter hillarity and improbability of the incident (which, to this day, leads many Anonymous to suspect the event was staged) was well recieved by /a/ as an example of failing with true style (in accordance with the context of the original "Unlimited [Insert] Works" meme), and an amused mod stickied the topic. Unlimited Essay Works immediately lead to the spawning of several minor, forced memes, taken from the teacher's comments in the margins.

KING OF HEROES, DO YOU HAVE ENOUGH SWORDS? 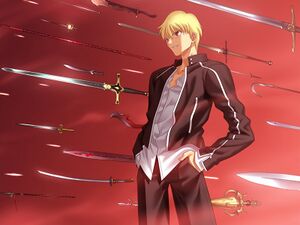 You're nothing but women and children!

An attempt at ridiculing the character Gilgamesh (who is also known as the "King of Heroes" in mythology), because of his ability to summon a large number of swords from another realm (through Gates of Babylon, not to be confused with Archer's Unlimited Blade Works). Because the number of swords summoned (real weapons, the ones Archer uses are often copies of them) is downright ridiculous, this phrase has come into prominence in anything involving Gilgamesh. Sometimes posted with an image of Gilgamesh from the game (using the ultra-badass Unlimited Blade Works scenario, due to his more casual manner of dress) having already summoned the swords. The phrase is sometimes used about other people who have ridiculously many of one item, such as "King of weeaboos, do you have enough DVD players?"

(In)famous video showing the SD versions of Rin, Saber and Sakura dancing to an insanely catchy loop ripped from the middle of "Sakuranbo" by Ai Otsuka, which ends with the titular "MOU IKKAI!" and then repeats. The loop is less than 30 seconds long, but the usually linked version loops for 10 minutes. Sometimes used as /a/'s Rickroll, though it's not as popular by far. If you're not a newfag, you will watch it all before resuming to post unhelpful things and crappy memes to /a/. In fact, you should do so now. The video has spawned a number of variations, such as Touhou Ikkai. 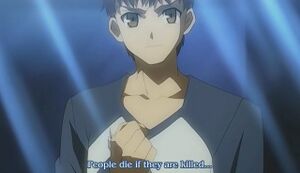 MASTER OF THE (NOT SO) OBVIOUS.

A meme taken from episode 23 of the Fate/Stay Night anime, where the idealistic hero Shirou Emiya, overcome by emotion, confidently shares his worldy wisdom with his Servant, Saber. While actually a play on a idiom that describes incredibly tough people who "won't die if they're killed" , the quip was literally intepreted and rapidly rose to acclaim on /a/ as an ironic and mocking example of how characters can be vigorously passionate yet painfully thick. Supplanted more well-known memes on /a/ like "O RLY" as a common response to someone asking or describing something obvious. Needless to say, said stock phrase often appears in other anime/manga sources as well, usually leading to Shirou showing up and "correcting" said instances. 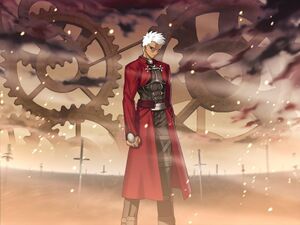 This meme rose to popularity particularly after the episode 14 of the Fate/Stay Night anime. During a particular scene in this episode, Rin Tohsaka's Servant, Archer, demonstrated a massive amount of badass by performing the Unlimited Blade Works and ultimately dying to the Servant Berserker. It is with the same episode that phrases such as 'GAR' came into prominence among /a/,

The format of the meme is fairly self explanatory: a poster will use a relevant word or phrase of their choice in the form "Unlimited _____ Works"

Other examples include 'Unlimited Maid Works', which originated from a Fate/Stay Night doujinshi in which Archer has a maid fetish; and 'Unlimited Rin Works', from another doujin where Archer uses his Reality Marble in a way similar to the original UBW, but replaces all the weapons with Rin.

EFG has attempted his own version on at least one occasion; "Fail/Stay Night"/"Unlimited Fail Works".

/a/ meme that has spread to some other boards and chans. Its origin is somewhat complex, stemming originally from a Fate/Stay Night doujinshi called "Platonic Magician", in which the hero, Shirou, must have sex with his servant, Saber, to restore her power, but in this doujinshi Shirou is portrayed as being so completely moronic that he can't even figure out what sex is, much less how to do it properly. (This doujinshi is also responsible for 'J-J-JAM IT IN!' and 'pOnOs/vagOOO').

When Velox drew his Fate parody sprite comics, he made a nod to the doujinshi during his parody of episode 15 (the "CG Dragon" episode). The comic shows Rin standing in front of a blackboard, pointing at a diagram that reads Mana Restoration For Retards!

while Shirou and Saber sit in chairs, reading the blackboard. Shirou, with a goofy expression on his face, points at Rin and says "...you lost me."

Typically, any time someone on /a/ makes a euphemism about having sex with an anime character, especially if they end it with "If you know what I mean", the next poster will post a cropped picture of Shirou saying "...you lost me." or just a picture of Shirou and taking the post very literally.