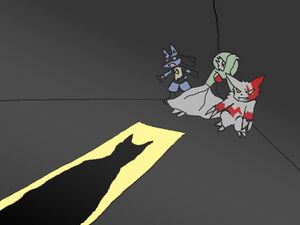 The three slaves of /v/.

Pokemon in general is mainly a /v/ thing (though it certainly does not abstain from /a/, where frequent anime threads are still created), where most of the threads exist. However there are a few memes associated with Pokemon. It's not surprising to see a Pokemon thread on almost every page on there.

These and many other variations all associated with the Pokemon Bidoof, known for uttering this inane noise and having its name derived from the word "doofus". DERP actually came from South Park, but /v/ made this their own. Bidoof also reminds one of dwarves or Redwall's shrews (who say "hurr hurr" a lot when they speak or laugh) and retards who often say "durr".

Misty, May, and Dawn

The ever popular girls of the Pokemon anime. These three travel with Ash on his adventures in the various seasons, in order. As such, Rule 34 can always be applied to these 10-year-old girls, improving your flashback of your childhoods.

Pimp Ed VS GAR Giovanni, both coming up on top together in epicness.

A meme sprung from the 4.5M GET and related to /v/. From the thumbnail, the GET (named azumanga_parody.jpg) appeared to be a picture of Twelve Kingdoms using Azumanga Daioh characters, but when clicked, it was revealed to be Giovanni (the Boss of Team Rocket from Pokemon) boxing a Chansey and seemingly knocking it out. Considering the extremely high hit points of Chansey (so much so that it is a popular tournament damage soaker) Giovanni's worthy battle instantly earned him praise for his manliness and toughness (some even call him GAR). An overnight sensation, his image became common "shooping" material (known as "GiovanniPunch"), depicting the ever so badass Giovanni knocking out anything in sight with his one-hit sucker punches.

Ironically, though Pokemon is also considered /v/ material, the 4.5M GET from which Giovanni emerged from is not seen as having to be shared with /v/ (though the Azumanga parody is). Additionally, it was later learned that in that particular episode of Pokemon, Giovanni lost the fight, though he and the Chansey were merely training and they reconciled in a hospital later. Still, Giovanni's incredible fortitude and strength cannot be denied, and his presence remains an effective way to punch out much of the shit that gets posted on /a/.

Here's a list of Pokemon that are (in)famous on many boards of 4chan.

Not so Famous, but Notable Pokemon

Here's a list and description of all the notable Pokemon, but aren't very worthy as forced memes (except for on /v/). 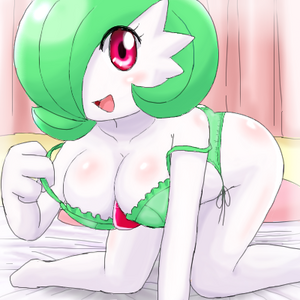 Yes. People fap to this.

A Pokemon that resembles a sexy anime babe, or asparagus, and is adored by Pokefags. There's alot of fan art of it having large breasts. Usually criticized on being a furry or not, as it doesn't really have any fur. However, such arguments are irrelevant, as it's fucking weird in any event. In between their "breasts" is a red spike, which could represent a anti-tit fucking device. On top of all of that, there's also the case of that there is male Gardevoir as well.

Has alot of fapfics, including one that involves the [Imperial Watch]. (link not working) 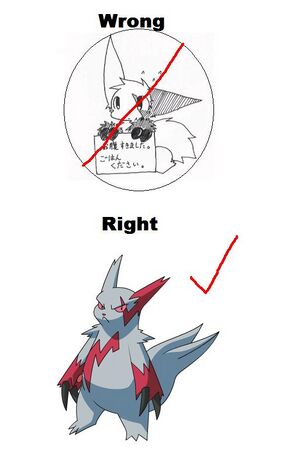 A true Zangoose is not really considered "cutesy", as it's portrayed as a deadly killing machine, but furries ruined that concept with their fan art. Either way, it's still furfag bait. Lastly, Zangoose's mortal enemy/mate is Seviper, a Pokemon that's a giant snake. 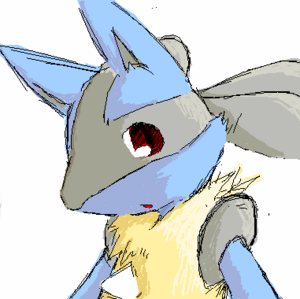 A Pokemon that resembles a anthropomorphic blue dog, with steel spikes coming out of it's chest and paws. It has it's own furfag movie, it's in Super Smash Bros. Brawl, and it's a furfag Pokemon.

Usually posted on threads to try to make everyone furry. Most of them are male. Mostly pictured as awkwardly receiving sexual advances from Sir Aaron/Riley (because they're not the same person, right guys?) 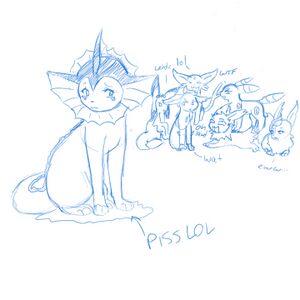 Vaporeon looks like a cross between a dog and a fish. Quite infamous for being known as the Pissing Pokemon. Due to constant requests to drawfags, they actually drew pics of this Pokemon pissing everywhere. Vaporeon may not be the only Pokemon with piss pics, but it is considered the worst of them all.

This is not the only reason why this Pokemon's notable. On June 17th, after someone created some crappy thread "if my post is # w/e, /b/ is now /vaporeon/", Moot actually made /b/ become /vaporeon/ VERY temporary. 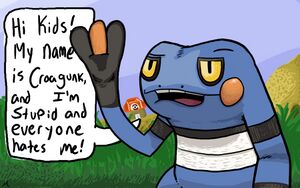 The Pokemon Croagunk resembles a giant blue frog, it is also a name of a another common tripfag that plagues /v/. Is "permabanned" on /v/, but currently goes different trips that are obvious. Almost everyone hates him. 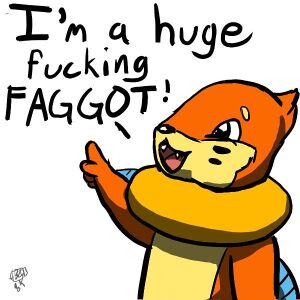 Both a Pokemon and a cancerous namefag on /v/. It's also one of the main Pokemon in the anime, even though it's a generic water-type that can EASILY be found in games. The Pokemon is considered a "huge fucking faggot" (those exact words, no more, no less). It's a otter with a floatation device around it's neck, you think it can't get much gayer than that. However, this is the same case with it's evolution, only much worst as it has "eye shadowing". This Pokemon also vaguely resembles Tails from the Sonic games, as it's tail is splits into two at the end.

On /v/, there is a tripfag Buizel, usually goes by Buizel > Pokemon. He was also one of the drawfags that plagued /v/ a long time ago, drawing pics of his fursona (Buizel), mutilating other Pokemon. It is rumored that he ratted out other drawfags to his mod buttbuddies on chat, and got them all banned, including the tripfag Player 1. As for right now, he posts anonymously, and is one of the most hated tripfags on /v/.