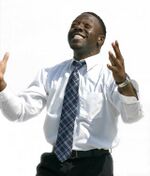 Promotions is a meme that originated in /v/ and arose around September 2006.

/v/ is technically a worksafe board, meaning that users are not allowed to post pornography or anything else objectionable by basic standards that, at least according to the standard of "Worksafe", could conceivably get someone fired from their job. However, since /v/ is pretty much /b/ with video games, this rule is almost universally disregarded. Thus, whenever someone posts an NSFW picture, it was typical for a user to shout "I JUST GOT PROMOTED" in an ironic sense, meaning to imply that he actually just got fired for looking at porn at work, and that someone else would be promptly promoted to take his spot in the company.

The meme gained steam when Black_Knight flooded every NSFW thread with the post "I just got fired asshole," which only egged trolls on to post more NSFW images, much to the dismay of moderators and janitors. Anonymous later latched onto this idea and created the "Promotions" variation, as explained above.

For the original "Fired" meme, the most ubiquitous is an image of a sullen, just-fired employee in a yellow shirt carrying out his belongings in a box. Once it morphed into the "Promotions" meme, one image that became popular was the character Phil Ken Sebben from a scene from Harvey Birdman, Attorney at Law, in which he repeatedly yelled "Prooooooomotions!". Both of these, however, are now pretty much defunct and outdated, and are rarely if ever used or seen on the boards anymore.

The most popular PROMOTIONS picture ended up being the one that stayed, pictured at the top of the page, known as "Promotions Nigra" (or "Promotions Guy", for those with less of a taste for /b/'s trademark asinine racist humor). Promotions Guy is a singular image of a middle-aged black male employee, triumphantly raising his arms and grinning in self-praise of the fact that he just got promoted. The posting of this image in any non-worksafe thread quickly spread to other worksafe boards, especially on /co/, which has a particular problem since there is no NSWF board on 4chan that allows images of Western comic books and cartoons, where it has morphed into an offshoot of the Hulkbuster meme.

Promotions guy has received many edits and variations, producing a wide range of versions for a myriad of situations, all with the same meaning: "You're posting NSFW material. Stop it before you get deleted, or promoted". The recurring theme in the edits is the mimicking of the pose, that being the frontward raised arms. Below are some examples of such edits.