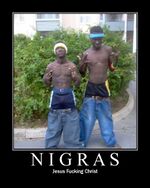 Nigras (also nigga, negro) are technically members of the Negroid race. However, their most identifiable feature is not their black skin, but rather their large mass of curly black hair and love of fried chikin. An exception is Happy Negro, whose head is covered by a red bandana. However, it is popularly believed that there is an afro present that is hidden by the camera angle. 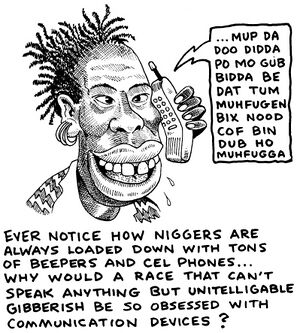 Bix Nood is inspired by a cartoon drawn by a member of Strormfront, a White Nationalist website. It is found on resist.com, featuring a black man speaking gibberish. The text in the picture, "Mup da doo didda po mo gub bidda be dat tum muhfugen bix nood cof bin dub ho muhfugga", is the source of the meme. Bix Nood is used as a placeholder for any racist comment about blacks.

i am a nigra

i am a nigra is a random comment with an attached webcam photo of a young black man smiling happily, which was mass-posted in late 2005 and eventually became a popular meme. The specific use of the word nigra is notable, as the word itself seemed to replace nigger and the much more common and popular Bix Nood as 4chan's chosen term for black people. It was also the inspiration for the name Habbo Hotel raiders call themselves.

Use in Habbo Hotel

There is a strict dress code for all nigras entering the Habbosphere pool deck. All nigras are required to wear a full tuxedo, but even then are not allowed into the pool. For the most part, the pool has been closed since July 2006 due to AIDS, and occasionally stingrays. In protests, nigras are required to stand at the entrance to the pool deck, changing rooms and the pool ladders. If possible, a nigra should assume the position of Afroduck. Anyone asking a nigra to move is a racist, there is no reason a nigra should move to allow the white man to get into the pool. The more they deny it, the more they are a racist.

The owners of Habbo Hotel have still failed to rectify this situation, and as such there are almost constantly nigras /b/locking the entrance to the pool deck.