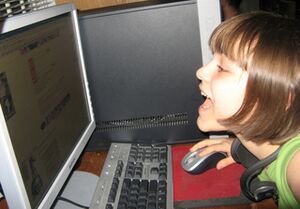 Loli-chan enjoying herself on /b/

In 2006, at thirteen years of age, Loli-chan was the youngest -chan. She was also the first chan to post on her own board, and is thus partly responsible for making chanchan what it is today.

When she first became a -chan she had no camera of her own. She was forced to use several family cameras to take her pictures. Since she was not supposed to be using those cameras, she could only take pictures before posting, and usually did not have enough time to take many of them, resulting in having to use several (in her opinion) unflattering photos in order to have a steady flow of new content.

Her earlier pictures, in which she had longer hair, were less planned than her more recent sets, in which costumes are used frequently.

When she first posted on /b/, and for a few weeks afterwards, most people thought her pictures were either shopped, or that she was an undercover FBI agent. To this day, some still believe those things, and a few people think she's actually much older than she lets on, due to her mature personality.

Loli-chan usually goes on vacations during the summer, the most recent known trip to New England, where she met her good online friend Shannon in Boston, and during which total chaos ensued on her board, with arguments in almost every thread. To prevent the same catastrophe from occuring again, she promised a surprise if all went well during her next vacation. When she returned, she revealed that there were infact two surprises. The first was pictures in which she lead everyone to believe her breasts had grown immensly, after which she revealed that she'd simply stuffed a bra. The second suprise was pictures of her in a bathing suit, much to Anonymous's delight, since most of Loli-chan's pictures are innocent in nature.

Some sets of images were leaked on to 4chan by Loli-chan's e-boyfriend in November 2008. At least, that's what a picture posted by Loli-chan on 4chan after the images were posted is telling us. There was a thread on chansluts containing all of the pictures. Due to the nature of some of the pictures every Anonymous in the thread was making retarded assumptions about Loli-chan being a cutter and all of the pedophiles were hoping that someone will post her nudes.

On August 28, 2012, Loli-chan was capped on paywhoring website MyFreeCams using the username Jezeb3l. Her images were uploaded to chansluts for all to enjoy.